This past weekend I opened my first play since moving back to the US. I am sound operator for Big River that will run for 5 weeks at The Palace in Georgetown, TX. It’s a musical based on Adventures of Huckleberry Finn.

Problem #1: Too many actors, Too few mics

The Palace is a community theatre located in a beautifully renovated 1920s era cinema. It is a shoe box approximately 111′ x 35′ (33.8m x 10m) with one balcony and a capacity of 300. There are obvious problems with doing theatre in a cinema from 1927, but the first challenge was getting the actors on mic. In order to amplify the entire 30 member cast the stage manager and technical director set up a mic sharing system between actors who were not on stage simultaneously. This sounded difficult from the beginning because I would need to make manual EQ and level changes with each mic trade-off, but aside from that they are very fragile. Connectors can come loose and create loud popping noises and cables can get pinched and tear. This is why principle actors in large productions often wear two sets of microphone + transmitter.

As rehearsals began and actors put on and off the wireless mics throughout the play, connections and mic placement were compromised and I felt sadly unable to guarantee quality. I could have gone to the technical director at the beginning and told him that their plan was bad, but I didn’t. One day during rehearsal I lost the mic for one of the main characters. I called for the spare hand-held kept backstage to be delivered, but it was too late. As he began to sing I turned off everyone else’s mic and brought the music down. No one noticed. It turns out that no one needs a mic!

Now my work there seems a little trivial since they could probably get by without all of the effort that goes into amplifying actors, but that kind of thing happens a lot in theatres. You just hope that it doesn’t happen too often to make you crazy. A better solution for this play would be to have given mics only to principle actors and singers. 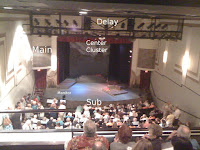 The previous sound operator suggested I use an automatic EQ to deal with microphone feedback, but I knew that the first thing to do was to aim the speakers correctly. The delay speakers for the balcony, for example, were pointed at the back wall of the plateau. Great for bouncing sound back at the stage! We lifted those up to be on axis with the last row of the balcony. The horizontal position is not great, but that’s the best I could do without scaffolding. One of the weirdest things I had to deal with in this entire day were these boxes. They had no information labeled externally and no built-in spectral divider (crossover) between the low and high frequency drivers. I had never encountered this before and hoped that I would be able to discover the proper frequency through empirical measurements.

Wrong. It may have been to someone with more experience, but with the measurements in the picture below in SATlive, I saw no clues. Instead I listened to pink noise and adjusted the dividing frequency to a point that sounded natural. 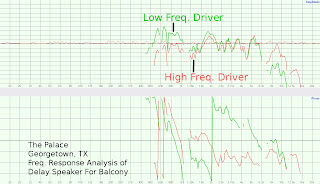 I finally got to use the clinometer app on my iphone. This helped me match angles between the Left and Right boxes. Lastly I pushed together the subs and leveled the center cluster that was hanging awkwardly. Optimization proceeded systematically with each driver’s polarity, phase, and level. Unfortunately I didn’t have time to check all of the electronics in the chain between the microphone and the speaker.

I then moved onto knitting them all together with delay and EQ. The biggest surprise when rehearsal started that night was that I had forgotten to include the stage monitors. The actors needed such high volumes that I should have optimized the monitors into the system as separate sources for the house. Fortunately I was mainly optimizing for vocal clarity, which does not enter into the monitors.

The biggest problems with audio at The Palace are the acoustics of the room, speaker placement, and speaker quality. The technical director mentioned that they were thinking of replacing their board with an LS-9, which would definitely help with operating shows, but $17,000 would be more effectively spent on acoustic treatments to get rid of some of the echo, one really good speaker, and rigging hardware to hang it in front of the proscenium. It’s a tough sale, though. The digital mixing board has lots of nice flashing lights and who wants to spend money on a $10,000 black box that doesn’t do anything?